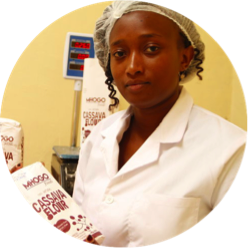 “It doesn't matter where you come from, or your money or background, you can just do it. Especially if your purpose is not just for you, but also for the community”

“My dream is to supply my cassava product worldwide in 5 years.”

Elizabeth started her own social enterprise called Mhogo Foods, manufacturing and distributing cassava flour in her home country Kenya. Being raised by parents who were both working in their own milling business, Elizabeth learned the tricks of the trade but saw that the millet and maize market was decreasing. This sparked her idea of starting her business in cassava.

Many farmers in Kenya already produce cassava, but do not know the value of their product. “There are many reasons why cassava is valuable. One is that it’s gluten-free, so it’s a good replacement for wheat. As in other countries, there is a growing awareness of the need for gluten-free products in Kenya”. Since production began in April 2016, Mhogo’s flour has been generating profits, affirming fair pay for producers, and helping to address local food security issues.  Elizabeth’s business has been running very well ever since.

Keys and barriers to success

Elizabeth's first barrier was to educate people about her products. “It took a while before I had customers and I had to educate them a lot and do lots of marketing with little money. At the beginning I was using my own savings”.

Elizabeth’s second barrier was related to finding the right financing partner. “The first year I got financing from a partner that promised to give me a certain amount of money but in two instalments: 50% first and then some months later another 50%. They never gave the second 50%, because they were only interested in the profit. I was not profitable at that time but they would not listen and kept asking for their profit. I ended up paying them”.

As a young female entrepreneur she also experienced the difficulty of men not taking you serious. “They used to think I was too young and they kind of stepped back when seeing me showing up at a meeting. Especially that I am a single mother so for them it was too much responsibility for me”. It takes time for her to convince men around her that she is capable of running her own business.

When Elizabeth started her business she did not have a lot of skills. At that time she learned it from her parents: “My parents were already entrepreneurs as they were working in their own millet business so I think watching them helped me a lot in my own entrepreneurship. From the beginning they were skeptical about my business, they were saying to me “don’t even try it”. But even if they thought it was not the best idea, they still showed me how to do it”. For Elizabeth this worked, because: “what matters most is passion and a good idea; skills come after”.